People often ask themselves why things are not going well for them, or why they can’t achieve their dreams. Many just assume that ‘that’s life’ and it’s supposed to be that way. In reality, though, it only appears to be something beyond our control.

Scientists have long since proved that the old saying ‘Thought is Matter’ has a factual basis. Our thoughts and emotions are small bubbles of energy, which are generated by our mind and then released to the outer world. One of the properties of energy is magnetism, which means that the babbles of energy with similar frequencies attract and merge together, creating larger forms.

Those larger bubbles have a greater magnetic force and they keep attracting more and more parcels of similar frequency until eventually all similar thoughts, experiences, memories and feelings create one big structure – a powerful ‘cloud’ of energy, connected to all its creators by energy links. Such a collective thoughtform is called an ‘Egregore’.

Egregores are naturally every time when there is a number of people who think in a similar way or have similar aspirations. Some of those thoughtforms grow to truly enormous proportions – for example, the egregores of entire nations and counties, the egregores of cities,  parties, movements, professions, and languages, but they are also smaller ones such as the companies, communities, and family egregores. They all influence us to a different degree depending on their size, age, power. For example, you can easily notice, that people who have worked for a long time in the same company, start looking and acting somewhat alike; people happily married for many years grow similar to a noticeable degree; newcomers begin sharing some characteristic traits of the city they settled in after a while.

Why does that happen?

It is because the human brain is in a way like a computer – it can be ‘programmed’ to act, feel, and think in a certain way. People get ‘programmed’ the egregores they belong to. Our first ‘program’ we receive as children – through our parents, who tell us what to do, how to react to events and what to aspire to. Children don’t yet have the capacity to question or challenge their parents’ views, so they absorb and embrace those influences, which prime them from the early age to ignore their own needs and dreams for the sake of ‘fitting in’.

You can easily notice that the majority of people tend to follow the rules and patterns that were given to them, without asking questions. They don’t stop to figure out whether those rules or patterns actually work them or not.

Here’s a simple example: a guy takes his date to the cinema hoping to make a good impression – not because either of them is into films, but simply because they both think that this is how ‘it should be done’. Quite possibly they would have a much better time going somewhere quiet instead, having a chat and getting to know each other better rather than half-absently staring at the screen.

Also, parents force their children to go to a certain school and aim for a certain job just because it’s considered prestigious, sometimes even without consideration for their child’s abilities, dreams or needs. When he or she is not doing well or trying to rebel against their plan, the parents’ reaction is usually something like: “Stop being an ungrateful git, we know what’s best for you!” They don’t realise that they would do a better job wanting well for this particular child, taking into account his or her individual skills and abilities, rather than forcing them into a rigid idea of ‘what a child from a respectable family should be like’.

As you may have already understood, those patterns are imposed on us by the respective egregores, which influence us and other people around. Healthy egregores will share their energy with their members while decaying egregores will suck in more than they give away – as they are only concerned with their own survival. The egregore which dominates our civilisation at the moment is only using people as its “food”, exploiting their energy and trying to squeeze of them everything it can, giving very little in return (it pushes people to pursue the wrong goals and make choices they wouldn’t normally make – just to they release lots of their energy.) Basically, it drags people away from their real evolutionary goals, because those are not important for the survival of the egregore. 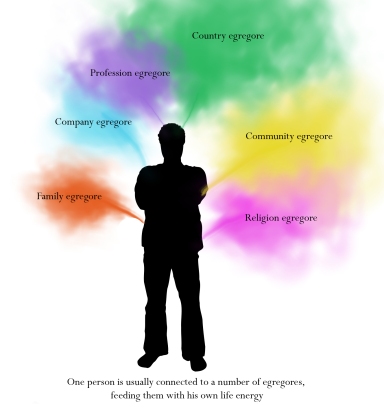 These egregores are what was described by Charles Baudelaire as huge ‘chimaeras on our backs’, which bring us down and sap our energy, but which we nonetheless consider an indispensable part of ourselves. Taking the position of an outside observer helps us understand how ridiculous that belief is.

The egregore of modern society,  originally created to help people live prosperously together as a community, is now decaying, which has a negative influence on everyone connected to it. Old dying egregores are like monsters devouring their own members – they push people to release more and more energy which is vital for the survival of the egregore, while not giving much in return. From their perspective, it doesn’t matter whether the person loses his health or even his life chasing phantom goals – if that happens, the egregore will simply use someone else instead.

Under the influence of the egregores of modern society, people occasionally lose their sense of Self to the point of becoming reduced to energy-releasing ‘biomechanisms’, devoid of any dreams or aspirations of their own. Deep inside though, they can remember their real, inherent values – and that split is the source of much pain and frustration in their lives.

There are plenty of examples of people who ‘had it all’ — houses, yachts and millions in the bank — only to have later realised that none of these things makes them truly happy or fulfilled. In fact, they feel depressed and empty inside, filled with regrets of having wasted years of their lives chasing mirages. While there’s nothing wrong with achieving financial prosperity, in itself is not a panacea or a recipe for happiness. Chasing the goals imposed by someone else will always eventually result in disappointment and disillusionment, sometimes referred to as the ‘middle life crisis’.

Most people stay trapped in that situation because they don’t realise that there is a way out and that they could be living a life of their dreams. To free your mind from the toxic egregores requires determination and courage, but it’s relatively simple and certainly achievable.

To start creating your life consciously, you need to begin with the mindfulness habit. Notice what thought and feelings pop inside your mind and ask yourself whether they are really yours. What purpose do they serve? The thought induced by the egregores have a characteristic ‘taste’ of sadness, resentment or hatred with is not directly linked to anything that happens in your life. Make a decision to ‘unsubscribe’ from the egregores that shape your mind in a negative way.

The easiest way to safeguard yourself is to make a firm decision to focus your thoughts on your true values and priorities. Determine who you are as a person and what you stand for. ‘Subscribe’ to a positive egregore that will empower you and propel towards your mission.

It’s a fascinating journey, although it can be very trying sometimes. Remember, you don’t have to do it all alone.

If you need answers or support on your Path, simply reach out, we’re here to help.